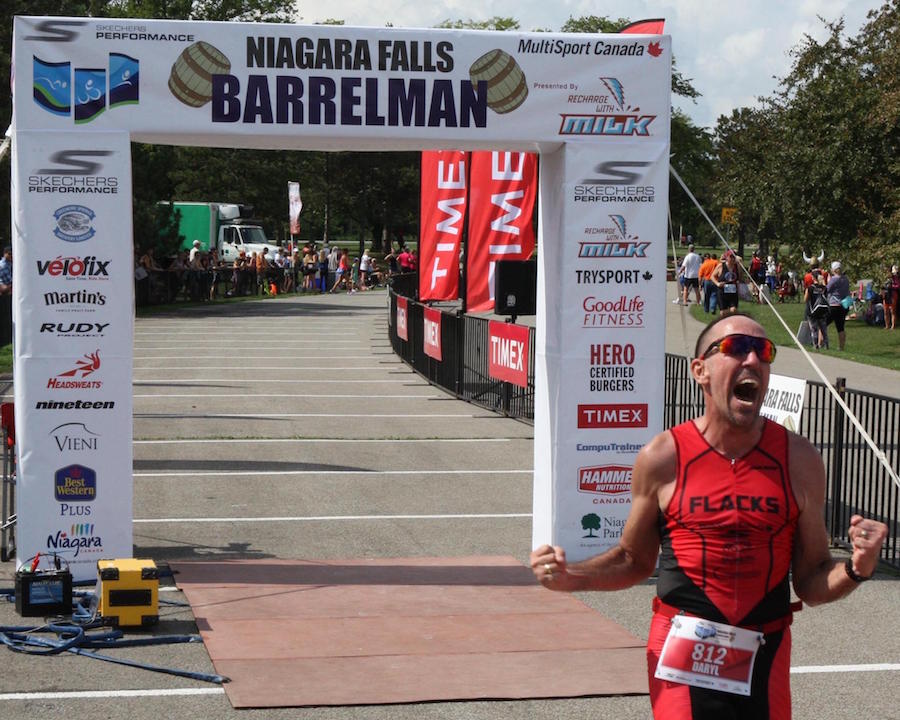 When it comes to long distance duathlon in Canada, Windsor’s Daryl Flacks is often the man to beat, making use of his ultra running background to finish with a strong final run.

Flacks battled cellulitis early this year, knee issues (meniscus tear, loose kneecap, and the onset of osteoarthritis), and on August 24th, while on a training ride, a truck pulled out in front of him and he collided with it, snapping the aerobars of his bike.

“Luckily, I anticipated the turn and was able to dramatically slow down before coming to a sudden halt while smashing my body against his truck,” said Flacks.

Determined to be on the start line Sunday, Flacks got right back into training, and raced to a third place finish at the Lakeside Standard Duathlon last weekend.

We will have to wait until Sunday to find out if Flacks will capture his third Barrelman Bike/Run title, but there’s one thing we know for sure, when he toes up to the start line, he will give it his all from start to finish.

Find out more about Daryl Flacks below:

DaryI’s introduction to Duathlon
“It was 2010 at the Tecumseh Duathlon. I had purchased my first road bike, a Trek Madone. I really didn’t know much about the multisport world but I could run and wanted to test my skills at cycling. I had just returned from vacation at Miller Lake. I had registered from the one computer with Internet service located in the main office at the seasonal trailer park. I lined up with 63 other competitors – Harold Walker stood out in my memory. He looked like he knew what he was doing…little did I know. I finished 4th OA and remembered that jello like feeling in my legs on the 2nd run. I wasn’t completely sold on Duathlon; I was still primarily a runner chasing faster times.”

The first time Daryl competed outside of Windsor-Essex County
“Subaru Victoria Duathlon 2013 and the first time I had competed outside Windsor-Essex County. I was looking for an early season race that was relatively close. I had no idea what I was up against or who anyone was in the multisport world; I just knew I loved to compete. I toed the line with 340 other competitors that day. It was on the final run; I turned off the road heading towards the finish line with spectators cheering. I sprinted right into transition almost taking out two fellow competitors. It was at that moment, panic set in. I had no clue where the finish line was, I was both confused and disoriented. Everyone was yelling at me, trying to help me find my way. I learned a valuable lesson that day. I now ensure I know where to find the finish line prior to the gun going off. I finished 0.8 seconds ahead of Sasha Gollish and I’m sticking with the story that I out kicked her, in an all out sprint to the finish. It just sounds so much better.”

Triathlon Experience
“I have completed two Triathlons. In 2011 I participated in both the Leamington and Tecumseh Sprint Triathlons. That was the last time I did a Triathlon, with no plans for doing one in the future. To say I’ll never do one again…well, “never say never.” At this stage in my life though, I have no desire to dedicate the time into improving my swim to a level that I’m happy with. I need to be competitive and my swimming is nowhere close. I’ve been told on more than one occasion that until I compete in an Ironman will I get any respect and I’m ok with that. I don’t care to do things I don’t enjoy, especially when I have a choice.”

“I don’t enjoy swimming. It’s just that simple; it’s never been something I’ve ever enjoyed. For as long as I can remember, I’ve never had a desire to swim. Anyone who knows me knows the water’s never warm enough, unless of course it’s a hot tub. I try to focus solely on things I enjoy, especially if I have a choice. Both running and cycling have a calming effect while swimming adds a great deal of stress. Extra-curricular activities are supposed to relieve stress not add to it.”

Sports background
“I grew up in small town Walkerton, ON. My parents always ensured my brother and I played a variety of sports while growing up. We were one year apart, so we often did everything together. Winters were all about hockey, I was a goalie and my brother a forward. Hours were spent stopping my brother’s shots in the driveway. Summers, I played softball. I pitched “windmill” and since my brother was a back catcher, it worked out perfect. Then one summer (11 years old), I was introduced to the game of golf. My first membership cost me $45.00 and my parents paid for my locker rental. My brother and I would bike out to the golf course first thing in the morning and play 18-27 holes a day. Everyone knew my family, so there was no getting into trouble or my parents knew before we got home. We would return home, cool off in the neighbour’s pool and then head up to the local tennis courts after dinner. We’d play until the lights shut off. That was my summers, we never stayed indoors.”

Why the passion for the longer stuff?
“I’ve never really had the top end speed as a runner needed to compete with the younger competitors. Inevitably, I’m getting older and I’m also slowing down. I needed to level the playing field, so I’ve migrated to the longer distances. I’ve also discovered that I have an innate ability to suffer. I’m ok with being uncomfortable for long periods. I’ve seen some dark times and battled through pain I’ve had little to no control over. It’s almost like I’m training my body to better deal with the discomfort I can’t control, that being Depression. Every endurance activity I’m able to excel at strengthens me mentally to battle back. Quitting is not an option.”

“The ability to suffer is an attribute that translates perfectly to cycling. With the biggest gains to be made and the largest impact on weaker cyclists, it only made sense for me to compete at the longer distances. I’ve learned to be comfortable with being uncomfortable and the longer the race, the more I excel. Long distance Duathlons allow me to take the spring out of youthful legs on the bike leg, forcing the competition to over cycle in an attempt to stay in contention. Blowing up my competition so it doesn’t come down to a final sprint is most often my goal. It’s not fool proof as we saw at the 2015 Barrelman Bike/Run.”

Ultra running. What led you down that road?
“Ultra running just seemed like the logical progression. I ran the Boston Marathon in 2009 and was looking to take things to the next level. I believe the seed was first planted at “Around the Bay” expo in 2009 when I met Helen Malmberg – Race Director for the Haliburton Forest Ultra. Helen was promoting her race and in my mind, it seemed intriguing. I had this running thing under control and it was time to test my limits, so I thought. I ran my first 50 miler that fall in Haliburton. Many lessons were learned that day and needless to say, I had a lot more still to learn. I’d never hurt so much and I told Dianne I would never do another 50 miler, it just hurt too much! Next morning, “Dianne, I think I know how I can run it faster next year.” Since then I’ve ran more than a dozen ultras with the longest distance to date being 100 miles – Cloudsplitter 100 (2015).”

As a very upbeat, positive, friendly, encouraging and approachable guy at the races, it came as a surprise to many when you revealed your battle with depression with an article you wrote. Why did you decide to make it public?

“When I wrote the article, I was going through an extremely difficult bout of depression. The worst I had experienced since its onset. As a MultiSport Canada Ambassador I had an opportunity and a forum to share my personal experience in dealing with a truly debilitating illness. I needed to submit an article for the website and thought, “why not write about what I know?” Putting my thoughts down on paper allowed me some clarity, it was therapeutic and at the same time I hoped it would bring some understanding of an illness often associated with weakness. I wanted to let others going through similar struggles to know, they weren’t alone.”

To help people understand. Can you describe what depression feels like to you?

“Depression takes over my mind and alters the way I think. I often experience achiness in my joints; I become annoyed and irritated with the nagging discomfort. I start to become fixated on insignificant or uncontrollable events. I rearrange items; everything needs to be a certain way and I become obsessed with cleaning. I’ll become uncomfortable in my own skin. My clothes hurt my body and people annoy me, everything annoys me – I feel as if I’m going crazy. I can’t concentrate, I’m tired and I get angry easy. Noises are amplified and begin wearing on my patience. Everything I’ve failed at becomes front and centre and I start to hate myself. I don’t care about anyone or anything. Then I get sad and I feel all alone. Everything is out of control, I just want to sleep and be left alone.”

How do you keep it in check?

“Keeping depression in check requires that I recognize the early warning signs and not panic. Addressing the symptoms early as with any illness, leads to the best possible outcome. Sleep, routine, and removing circumstances that cause me to become overwhelmed, help to minimize the effects. I need to feel in control and allow myself time to recover. Running and cycling provides me an outlet, an opportunity alone with my own thoughts away from the distractions that often raise my anxiety. Often the battles that go on in my head are epic, but necessary to gain some clarity.It’s a stretch to say that I love running but I love the feeling I get when I’m done! It’s the sense of accomplishment and a freedom from mental clutter that makes it all worthwhile.”

“Running’s not really an option for me as much as it is a necessity. I don’t run….and the result is a quick downward spiral that is debilitating. Running for me keeps the depression in check. It’s my medication and without it…well, like anyone who is prescribed a medication, whether it be for depression, diabetes and/or heart disease the repercussions could be life threatening.”

What advice do you have for others that are experiencing the same issues or to those to offer support for their loved ones?

“For those experiencing the same issues, understand you’re not alone. Talk to someone you trust and ask for help. What works for one person may not necessarily work for someone else – there’s no universal solution. Often the best approach is the direct result of trial and error. For some, a combination of approaches works best. While it’s human nature that family and friends want to fix the problem, trying to make things better only fuels the emotional turmoil going on inside. We’re not broken per se but require comfort and reassurance. Remaining supportive is paramount in reducing the loneliness and guilt that one experiences when struggling with depression.”

Looking To Track An Athlete at Niagara Falls Barrelman? Update on the Barrelman waitlist and transferring race categories. Registration...
Scroll to top