Well the first triathlon of the season has come and gone. MSC started off their expansive season of events with a sprint distance race in Woodstock, which I have to say is always one of my favorite venues. Clean, calm water in a great park setting with safe country roads for the cycle…what’s not to love? The sprint distance is always fast and furious, especially with the increasingly competitive field that is turning out to local Ontario races.

I was fairly confident with my training going into the event, especially with the run improvements I had been seeing it my winter/early spring running races. However, I decided to not disrupt my training for this race and went in on a full week of training. Always good to see what can happen on tired legs, but I would be lying if I said I wasn’t a little nervous about this decision on race morning.

After taking a very hard blow to my face in an open-water training swim a couple days before the Welland half last summer I have consistently struggled with open water swims. I tend to be very apprehensive during the swim and shy right away from going near anyone’s feet and end up losing a whole lot of draft.

I was hoping this would be the race I would be able to conquer my fear and have a swim that reflects the times I have been achieving in the pool, however it was not meant to be. I got squeezed between 2 people at the start of the swim, took a bit of a beating, and got my goggles filled with water. Ended up panicking a little and having to swim way out right to get myself back on track. By the first buoy I was back in the game and attempted to make up some time and work my way through the field. Came out of the water 6th female and knew I had some serious work to do in the rest of the race!

This was my first swim in my new 2XU X:2 wetsuit (which was awesome!!); however, I did not sufficiently cover myself in vegetable oil prior to the race and had some issues getting it off in T1 costing me a few seconds over my usual time. Almost forgot my race belt as well. Just shows no matter how many races you have under your belt, these things happen and transitions are something that should be practiced as the 4th discipline of the sport. 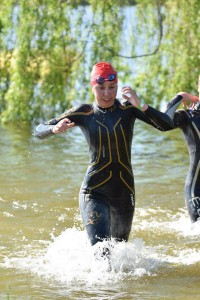 After my rough transition I was on my way and started to hammer away on my bike. This was my first time racing on my new TT bike so I focused on staying in a somewhat aero position throughout the ride. I managed to move up to 5th place throughout the course of the ride and came off the bike within 30 seconds of the 3rd and 4th place women.  I was very happy with my ride, as it was almost a minute and a half faster than the same course last year. Unlike T1, T2 went off without a hitch (actually tied fellow Ambassador team member Angela Quick for the fastest T2 amongst the ladies) and I was off for the run very quickly.

Starting off the run strong and moved up to 4th place within the first 500m of the run. 3rd place was in sight and I made it my goal to close the gap throughout the remainder of the run. I felt pretty good considering my tired legs but couldn’t close the gap for 3rd.  Ran in happy and positioned in 4th place. I was very happy with this run, my fastest pace for a 5km off the bike ever.

Overall, this race was a good start, but many things to work on before round 2 at Binbrook in a couple weeks. Mainly getting my swim to where I feel it should be so the race isn’t a game of catch up.

Had a great time post-event catching up with people I haven’t seen since the 2013 triathlon season and was pleased to hear so many people had awesome races after our long, hard winter.

Thanks to Multisport Canada for a great event and their continued support and looking forward to seeing everyone who is racing at Binbrook!