By Kristen Marchant, Member of the 2014 Recharge With Milk Triathlon Series Ambassador Team 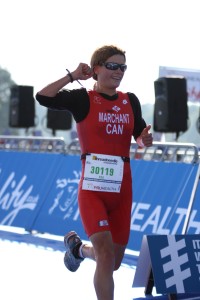 So I am going against the grain here with this post since these days it takes no effort at all to find someone touting the benefits of using some sort of gadget to make your training better. Power meters seem to be all the rage these days- I couldn’t count the number of times I have heard someone say “I/you NEED a power meter!” Now, if anyone looks at my race wheels this year, they will see that I have a power meter- but it doesn’t work. It simply came with the race wheels I got second-hand, the battery lasted about 5 rides, and when it died I a) didn’t care very much and b) discovered that not many people (none that I found- although I didn’t look very hard) carry the tool that would be required to take the cap off and put in a new battery. So I am leaving the power tap there just to make myself look super cool.

I also don’t train with a HR monitor (once in a blue moon I’ll wear it just to see what it is- but I never look at it until after I finish the workout). I will wear a GPS in the summer when I ride my bike on a new route, but again, that is just out of curiosity to see how far I have ridden, not really used for training purposes.

The first reason I feel that all these gadgets are unnecessary is $$$$$$$$$$$. In case that isn’t clear- they are EXPENSIVE!! I have not bought a GPS, I won it at a race (I actually have 2- anyone want one? [POLAR RCX5- needs a new battery but otherwise works fine]) The un-used power tap on my wheel also really did just come with the race wheels- I got a good price for the wheels alone and the power tap was an added bonus. The HR monitor (that came with the GPS) would be a more justifiable purchase if someone really wanted to get one (as they are less expensive) but there are certainly flaws to training based on it.

I do all my training based on perceived effort. This is a “flawless” tool- it never runs out of battery and is always accurate. If I feel I am giving 100% then that is what 100% is for that day. I know that the actual output may vary from day to day, but so what? If I am tired one day I don’t need a power meter giving me raw data in my face to tell me that I feel like shit. I know I would just get super pissed off and would not enjoy the workout if I couldn’t hit the numbers that I wanted to. By the same token, if I feel great, I know I feel great and I don’t need a power meter or HR monitor or any other gadget to tell me so. Although this post is mainly referring to cycling, the same principle applies to swimming and running. I train by effort- I know when I feel crappy and tired and when I feel great, I don’t need any gadget to tell me that. (I wear a simple watch- it’s all I need).

Another benefit of training based on perceived effort is that this helps me to stay happy and positive when I am training. I don’t like to be given unquestionable evidence that I am not performing at a 10/10 on a given day. I just get annoyed and don’t enjoy the workout. By training based on perceived effort I can acknowledge that yes, maybe I wasn’t feeling particular fantastic or going particularly fast for a particular workout, but if I gave it the effort that was required then I can be satisfied with the training session and eager to come back the next day.

The next benefit is that this translates to race day. I am attuned to how my body is feeling and can gauge my effort during the race to pace myself appropriately. I don’t attend every race in a rested state, some races I simply train through- by being aware of how I am feeling I am able to pace appropriately for the day.

A conversation I recently had with a swim coach also highlights some other reasons I don’t see the necessity of using gadgets while racing. When I race, I am racing the other people- that’s what a race is supposed to be about. I don’t need to go to a race thinking “I’m going to cycle at exactly this power so that I can run the best.” Where is the fun in that? There is no risk or thrill in going to a race knowing that you won’t blow up because you’re cycling at a pre-determined effort. One race that sticks out in my mind is Multisport Canada’s Binbrook triathlon last year. Racing Leanna Lee on the bike I gave it everything- I was cycling at a much higher effort than I have ever done in a race- and I suffered dearly on the run. But it was a great learning experience (and I still won the race :P). After that race I knew that if I wanted to run well, I couldn’t go that hard on the bike. It also actually felt like a race. Had I been racing with a power meter I would have held back on the bike, done my own thing, and played catch-up on the run- in other words, not really raced. Racing is fun, so I want to actually do that.

Another reason to not use these gadgets is that I don’t want it to be “about the bike.” Unfortunately I feel that this is the direction that triathlon is heading at the moment. Someone with more money to spend and therefore a better bike with more bells and whistles could place better in a race, without being a better athlete. Had I not had a TT bike last year and instead been using my road bike I wouldn’t have won the races I did. For example, at Worlds, even with a TT bike it was still one of the least expensive/ upgraded (ie. Fancy race wheels) bikes in the field. With a road bike I could not have competed. In other words, I could have been a better athlete than others, but not won because someone else had more cash to spend. And on that note, I don’t want to win a race but have a nagging feeling that I wouldn’t have if someone right behind me had been racing with “poorer” equipment than myself. I want the best athlete to win, not the richest or the one with the better equipment. (but hey, that’s the way it is going to be in many situations, so what can I do).

But back to my original point- there are many benefits to training with perceived effort, and it is possible to be good without forking out the cash for power meters, GPS’s, and heart rate monitors. If you are an athlete just getting into the sport (or been competing for years) there is no need to be intimidated by others who have these gadgets. Train using your own personal and mental motivation and not the numbers in front of you (other than a watch to tell you the time). It does wonders for your athletic capacity, and can help in other areas of life. Developing your own motivation to push yourself in a workout when it hurts isn’t always easy, but the pay-off is huge. Try it.

Find out more about Kristen Marchant.