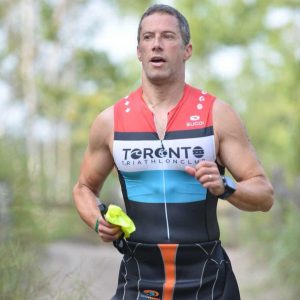 The first race I ever participated in was the MSC Toronto Island Triathlon. I think I gave high fives to every volunteer and race official I passed. Since that first race almost 10 years ago, I keep it on my calendar every year.

It’s my favourite race because for a few reasons; it is extremely spectator friendly, I can ride down to the ferries in 20 min and it has one of the nicest swims of all races. The transition zone is on the site of the long-forgotten baseball diamond where Babe Ruth hit one of his first home runs…Steve Fleck (the voice of Triathlon) tells the story before each race.

Triathlon is an interesting sport.  For a long time, there was a belief that you graduated through triathlon distances. Participants started with the try-a-tri, moved to the sprints, added Olympic, then moved onto long course and ultra-long distances (think Ironman). With young kids, I was always happy participating in short course races. If I missed one because of a family activity (or, sadly injury) I could race a week or two later.

So what has changed in the triathlon community? More participants are selecting to stick with short course races and trying more creative alternatives. Next year’s Olympics are adding triathlon relay (300M swim, 7K bike, 2K run). Last year, Simon Whitfield (Canada’s most decorated Olympic Triathlete) participated in a swim/run/swim event. A friend mentioned he is participating in a swim, bike, run, swim, bike, run event (I have to assume it’s not a wetsuit event). Triathlon organizers are making great headways; adding lots of variety to make our sport more exciting for both athletes and spectators.

This year’s MSC Toronto Island Triathlon had to transition to a swim/run event due to the high water levels on the Island. Coming back from injury, I was really looking forward to racing my first triathlon in two years. The reasons I always come back to the Island haven’t changed and given we go from the swim to the run, it is even more spectator-friendly than ever before. What I always tell someone on their first race – the first time you race will be a Personal Best. I am excited to try something different, look forward to a new PB for a swim/run event and hope to see you all on the Island August 18th.