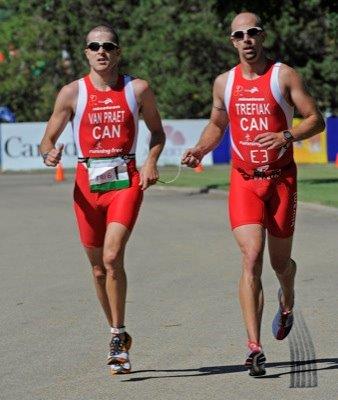 Written by Ryan Van Praet (pictured on the left)

As the season has kicked off recently in Ontario and I look to toe the line in Welland for the Long Course to kick off my year, it seemed like a good time to write this article.

No doubt in the past you have seen the odd triathlete or two show up at a race and look a bit “different”. Maybe they were missing an arm or leg, rode a specially adapted bicycle, or were tied to another triathlete by a cord? Paratriathletes (athletes with a physical disability) are out there and with Rio just around the corner, the Paralympics provide a new visibility for Paratriathletes.

Being a legally blind triathlete for over 18 years, I have had the privilege to race all over the world, from ITU sprints, to the Hawaii Ironman, and more. It has provided a wonderful opportunity to gauge the curiosity of the public on what exactly are Paratriathletes. Often times we can seem like some sort of alien beings descending on a race with our contraptions and ropes and braces, etc. I wanted to tell you first and foremost: IT IS OKAY TO BE CURIOUS!!

Paratriathletes are just that…Triathletes who happen to race a “little bit differently” from the mainstream. In this article I will look at a few facts &amp; fictions surrounding Paratriathlon, but highly encourage you to ask questions the next time you see a Paratri at a race… we are often more then happy to share our story.

1. DISABILITIES ARE NOT ALWAYS VISIBLE

The traditional picture of disability is often a wheelchair, or person with a white cane or crutch. However not all physical disabilities are obvious at first glance, but this doesn’t mean they aren’t present. It is important to keep in mind that Paratriathletes have a variety of challenges ranging from paralysis, amputation, blindness, MS, Cerebral Palsy, club hand/foot, dwarfism, nerve disorders, and so much more. If someone is participating as a Paratriathlete, they are doing so because they have a certain disability that requires them to use or receive special modifications in order to participate.

So just keep that in mind… don’t judge the book by its cover and assume they are “faking”. I’ve not met a “faker” yet in the paratri world… not to say they don’t exist I suppose.

2. WE ARE NOT ALL BORN “BROKEN”; THERE ARE SOME PRETTY INTERESTING STORIES TO BE TOLD

Often one of the biggest misconceptions that I try to dispel is the fact that we are all born “broken” (well I guess I was, with a genetic eye disease,) but the awesome part about paratri is the cool stories you get to hear! In my case, it’s boring, I was born with a disease, I adapt the best I can, blah blah blah.

However, over the years I’ve met some awesome paratri’s who became paratri’s in a variety of interesting ways. Everything from war wounded, to motocross accidents to believe it or not, having a leg lost due to being crushed between two trolley cars in San Francisco! Now when you have something that traumatic happen and you still get up and get back into the game of life; that’s pretty awesome! Paratriathletes fight the public perception of “oh poor lil’ guy, good for you!” Honestly however, this is the last thing we are looking for; we just want you to get to know us as people first and our disability second. There are some pretty amazing people out in the world of Paratri. It would be worth your time to get to know them!

3. WE LOVE THE FIGHT &amp; WE ARE OFTEN PRETTY DARN TALENTED

If I told you that some paratri’s have the swim speed of Angela Quick (not me), or the FTP of Alex Vanderlinden (not me) or the running speed of Lionel Sanders (again, not me…), would you believe me? The talent of a paratri is often hidden by the mask of their disability or the adapted equipment they use. However there are some insanely talented folks out there and they should not be underestimated. Canada’s own Stefan Daniel is a gold medal hopeful for Canada in Paratriathlon in Rio. He is deeply talented and I would love you to see that, before you see his atrophied arm.

One thing that is certain with Stefan, myself and all the paratri’s I’ve ever met is… We love the Fight!! Just like in the age group ranks, there are folks out there being participatory (which is awesome) and folks competing for a win. I think the general assumption is that all paratri’s are just out “participating.”

This is true for some and there is nothing wrong with that at all. However there are tons out there who are competing and they want to do just that…COMPETE!! Don’t feel sheepish or embarrassed to compete with a paratri. A hard fought battle late in the game is just as enjoyable for the paratri as it is for you! Trust me, we want to whoop you just as badly as you want to beat us.

Compete, give it your best, and let’s see who gets to the line first!

Respect is ultimately what it comes down to. If you race a paratri hard to the finish, that shows you respect them as an athlete and show no mercy. We love that, we want that, and we need that. Too often society wants to “take it easy” on us. I think paratri’s compete because in this arena we don’t want or expect people to “let us win” or “take it easy” on us. You are showing us great respect as athletes and as people by racing us as hard as you can!

Just keeping in mind my first point, paratriathletes are not out there to cheat or get an unfair advantage. We love the sport and simply are looking to participate on as equal a footing as possible. Now that being said… does a tandem bike go faster then a regular bike? Not necessarily!! On a flat course there is an advantage (not double), but on a hilly course it is pretty much even-steven!! Does an athlete having someone help them in transition with their gear save a bit of time? On the surface it may appear so, but in reality it doesn’t. The modifications paratri’s use are a) there to help them compete in the first place and b) used to keep us as equal to the rest of the pack as possible. What may appear to be an advantage is often nothing more then an equalizer of sorts. Trust me, sitting on a tandem behind a hot and sweaty guide is not something I’d consider as “an advantage”… yikes!

Lastly I think the message to get across (if I haven’t done a good enough job already,) is that we are just people. Don’t be afraid to come up and talk to us, ask us questions, find out about our cool stories, check out our cool specialized equipment and even friendly trash talk is good too!

Society often fears being politically correct enough and not wanting to offend anyone. If a paratri is out at an event, they know that they are “on display” to some degree and from all the paratri’s I’ve met; are okay with this. It is our opportunity to change public perception on disability and disabled athletes. Come say hi!

From my own personal perspective and experience, I’ve been doing this a long time and have encountered some amazing folks who are willing to trash talk me, ask questions, and just treat me like any other athlete. I have also encountered those that talk “loud and slow” because they believe disabled persons are all “broken.” I don’t mind though, as I think this is a great chance to educate them on ability versus disability and encourage them to learn more. The MSC series is fantastic at allowing paratri’s to race with their peers and gives them a great platform to share their stories.

Triathlon provides us with many of the same rewards it does to the age grouper, in terms of self confidence, an outlet to test our mental and physical potential, an avenue to make new friends, a love of the outdoors, love of all the gear and most of all a way to celebrate life and the ability we do have.

Paratriathlon is growing quickly as more folks see that it is possible to have a disability and still compete with everyone else. This is why I am so proud to be part of the Multisport Canada Ambassador team, as it is a chance to share my story, feel respected among my peers and to demonstrate how amazing this sport is that we all love so much.

See you at the races – come say hi! Check out the tandem. Say hi to my guide (sometimes they feel lonely and neglected, haha) and let’s race hard! 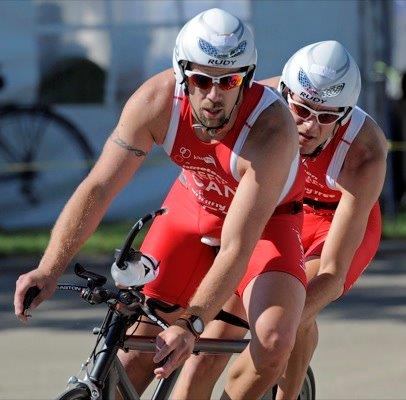 How Watching The Pros Can Help You In Triathlons Gravenhurst Olympic Triathlon Sold Out, spots remain for the Sprint Triathlon...
Scroll to top