Team Canada was supposed to toe the line for the ITU World Duathlon Championships in Almere, Netherlands this past weekend. Yet a cocktail of swim, bike, run, coaching, mechanicals, performance software, solo practices, Zoom calls, physio, fireworks and bbq’s still seemed to trickle through various parts of the country. 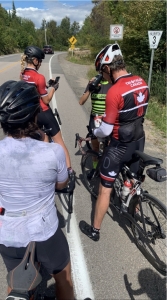 During qualifications in Victoriaville back in 2019, I made a major tactical error on the bike turnaround and somehow grabbed a spot behind Alana Bonner. Laughing alongside Bernadette Lootgens on a 34 degree course post-race, seemed about right for July. Shawn Kimmel surfaced during a Loaring Personal Coaching time trial then Tara-Jay Lapstra wrapped up the Ontario duathlon season… a critical time to process what a small section of the national team might look like in 2020.

During the World Cup Cycling Championships, Steve Fleck’s memorable voice hosted the event at the velodrome while some members of the team reconvened during the off-season . In early March I ran watchless through the Chilli Half Marathon and tried to keep Paul Huyer in sight within the first few kilometres. I warmed up earlier with the Jones Family and who knew when we walked off that course, we would ultimately be preparing for global change two weeks later. I got on a call with 2019’s flag barer Natalie Wright who was 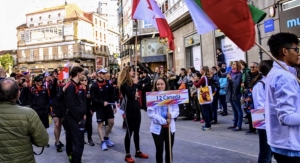 fearlessly taking one for the team in healthcare this year. It suddenly became very clear that this was going to be a pivot…for everyone.

Darcy Hinds also agreed in April that World’s was most likely going to be cancelled, even though increased training volume was still on the horizon. Fellow Ambassador Dempsey Cruz commented on how regardless of our circumstances, giving someone a virtual high ‘5’ still had a lot of weight. With Zwift cycling rising in popularity, Jesse Bauer took the wheel and set up careful voting through Canadian Duathlon Enthusiast’s forum. Before I had a chance to brea 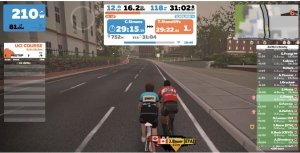 th, I was in a ride schedule with Angela Hofstra and Michelle Lennox every week. 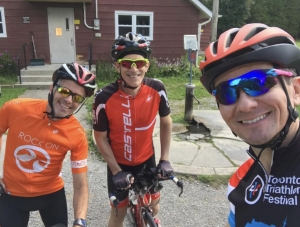 mith and I blasted through a weekend of NCCP training with practice templates that kept us up past midnight. Meanwhile Tim Doris and Darren Cooney put time in the saddle while we underwent safety protocols across swim, bike, run and transition.

91k into a ride with Karri Beck, I immediately grabbed my wetsuit after and caught Liyang Wang heading out for a solo session. I said “If I don’t swim now, I won’t go at all”. We’ve all been in that headspace before 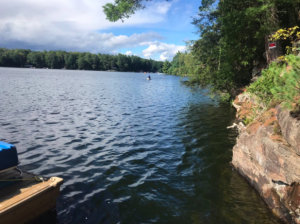 , so without hesitation Dave Farrow safely spotted the pontoons ahead on a jetski while my heart rate was still up. No matter where you train, accidents rarely happen from over-communicating…so I followed Tory Jones and facilitated her interval run along the mix of ATV gravel trails and paved rollers. The harsh realities of our ‘normal lives’ often dictate how and when age-groupers can train. So it was around 80k when I found myself powering down the descents of Algonquin on Kevin Gallagher’s wheel. 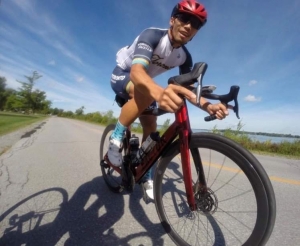 There’s a relationship between skills and challenge.

If the challenge is high enough and you believe you have the skills to match that challenge, that’s the ‘sweet spot’.

Multisport is a discipline where you race alone but hurt together.

I think one of the things that makes up part of a national team’s prosperity is the social construct of how they fit together…rather than competing to show they’re more fit than others.