Yesterday I raced the Niagara Falls Barrelman Triathlon. Man did we ever luck out! The night before the race they were calling for thundershowers all day. We had a look at the radar map about an hour before the gun, and there appeared to be red cells heading straight for us. But, once the gun went it appeared that the universe felt we needed awesome conditions for the race, so the clouds parted. About an hour after the gun I was working on my sun tan (which is dramatically lacking since I have been doing all of my training indoors).

I made a real effort to get to this one with adequate time so that I was not rushed in the morning. I got there 1.5 hours before the race, a new record. I had ample time to get ready and get a warm-up in, so I was in a nice and relaxed head space when the gun went. I didn’t swim very well. I got ambitious and went out as hard as I could, trying to hold Alex Vanderlinden’s feet. Unfortunately, my efforts were futile and by 200m I was dropped. This put me in some severe oxygen debt, and when the group of swimmers who are closer to my ability approached, I was quickly dropped as I needed to slow down to allow the system to reset. This meant swimming alone the rest of the way. Oh well, don’t know if you don’t try.

I exited the swim 2.5 minutes back of who I presumed to be Cody Beals. I knew he would be hitting the bike hard, right from the get go. I vowed to do the same. Unfortunately, my power meter copped out after the race in Lakeside last weekend. Apparently the strain guage has failed. On this note, I have to give a huge shout out to Stages. All products, have malfunctions, flaws, etc. How your company deals with these is the true test. Within 10 hours of messaging Stages they informed me what the issue was and that it would be covered by warranty. Within 48 hours a replacement was shipped out. And today (6 days later) it is scheduled for delivery. I have nothing but good things to say about this company, and their product.

That being said, I raced this one on feel. I figured this was a good race to get out of my comfort zone on the bike. I also knew that around 40k into the bike we would have a massive tailwind, and that a fast bike split was definitely going to be possible. The first 40k or so though was some tough riding, a mixture of very gusty cross-wind, and tough headwind. I almost went down on several occasions. But, as promised, around 40k that cross-wind turned into a tailwind, and then we were flying. Additionally, I was testing out Garneau’s new one-piece aero-suit, which has shown in wind-tunnel tests to be one of the fastest on the market. I took all of these factors as a chance to treat the bike as a pure-90k TT, and worry about running when I got there.

I entered the lead around 65k. I went by Cody as hard as I could as I wanted to try and snap the elastic as quick as possible as I was unsure how I was going to run after biking so hard. The course turned out to be closer to 93k than 90k. This meant on paper I wasn’t going to break 2hrs, but I could see that I had a good shot of going sub 2hrs through 90. This was motivating so I really pushed the final 20k. I ended up passing through 90k in 1:57:10. The average speed for the entire ride (92.8k) was 45.83.

Read the rest at LSanders Tri. 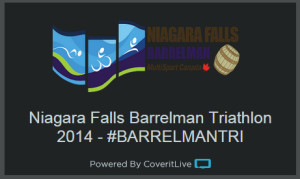