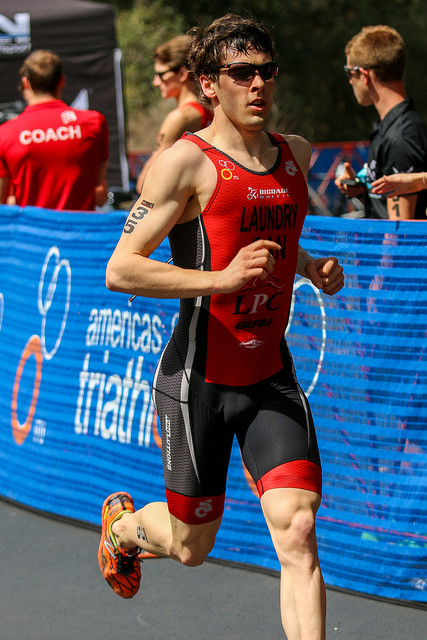 MultiSport Canada Ambassador Jackson Laundry has had an outstanding season to date, with some big results not only in the MultiSport series, but also in races further afield and across North America. We caught up with him as he puts his final preparations on the remainder of the season, which includes an appearance at Barrelman on September 18.

MSC : It’s been a big year for you so far. You took part in your first Long Course triathlon in Welland (which ended in victory), there were more wins on the MultiSport Canada circuit as well as some top showings in draft legal races and a third place at Rev3 Pocono. What’s been the catalyst for these great results?

JL: There are a lot of factors that have come together that have allowed me to have my best season yet. The most important thing has been consistent training year round for the last three and a half years. Since joining Team LPC, I’ve improved my consistency which is certainly the most important part of training.

MSC: Would you consider 2016 to be a breakthrough season?

JL: Yes, I would consider this to be a breakthrough season for me. I expected to improve this year, but I improved more quickly than I anticipated, especially in terms of the run. It seems that I have reached a whole new level compared to last season.

MSC: If you flip through the year so far in your head, what’s your stand out memory?

JL: My stand out memory for the year would have to be the run at the Elite National Championships in Ottawa. It wasn’t my best race of the year, but I really suffered on that run and finally caught three or four guys in the last kilometre to finish 11th overall and 8th Canadian.

MSC: What would you consider to be your greatest achievement to date?

JL: Thus far my greatest achievement would have to be finishing second at Rev3 Quassy. That was likely my best race this year, and it also showed that I have made up most of the gap on top pros like Cam Dye who finished first in that race. Now, I can see how close I am to winning against top pros and it will be my focus when I’m training this off-season.

MSC: Go back for a moment to your decision to push you’re your triathlon career to the next level. What was the turning point in deciding to pursue the sport at the top level?

JL: The turning point for me was finishing my undergrad degree in Human Kinetics. When I graduated in Spring 2015, I chose to put a lot more time and energy into training and racing. This has increased my training load, but also improved my recovery between workouts (more sleep, better nutrition).

MSC: Who are the influencers in your triathlon career?

JL: Mainly my coach James Loaring and all of the world’s best pros, including local pros like Cody Beals, Lionel Sanders, and Andrew Yorke. I have my Dad to thank for getting me started in the sport, and he was my training partner for the first few years. He’s still racing (often winning his age-group) and we do the occasional long bike ride together. My whole family has been very supportive right from the start and I’m very appreciative to have them behind me.

MSC: Let’s talk about race day for a moment. What’s your greatest strength when it comes to racing?

JL: I think it would have to be my consistency. On race day I just focus on producing an “all out” effort. Whether I’m racing a field of 50 pros or three pros, my strategy is the same. I don’t really get nervous anymore, and I think that’s very important for having consistent results.

MSC: Go back to when you first heard of the sport of triathlon. What was the hook for you? What made you want to take part in the sport?

JL: My first race ever was the Belleville Kids of Steel Triathlon in 2004. It was likely my Dad who first suggested I sign up for it. I finished last place in the swim out of 35 in the boys 10-11 age group! I finished 23rd in the end, not even in the top half. I raced in one KOS event each year for about five years and I kept improving on minimal training, to the point where I eventually won the Picton KOS race. I think I really got into triathlon when my Dad and I joined the Durham Region Triathlon Club when I was about 15 – that’s when it started to become fun to train. Since then I’ve gradually increased my focus on the sport.

MSC: Your relationship with MultiSport Canada, when did you first race in this series and what was your experience?

JL: My first experience with the Multisport Triathlon Series was the 2012 Lakeside Triathlon. It was a good race for me, I was trying to chase down the leader Cam Black but I ended up in second. I remember it was a really nice venue and a fun day. I won a watch as a draw prize too!

MSC: How important is it to you to be a MultiSport Canada Ambassador?

JL: Being a Multisport Canada Ambassador has been a great addition to this season for me. I’ve really enjoyed racing locally and the Multisport series organizes the best races in Ontario! Competing for prize money brings out some solid competition and that makes the races exciting for us. I think the Ambassador Team has been really helpful for a lot of other local athletes too, including several of my training buddies and teammates.

MSC: Is there such a thing as a “typical” training week for you?

JL: Each week looks very different depending on the time of year and whether I’m in a big training phase or taper phase. If I had to average all my training, a typical week would have six swims totaling 20km, five bikes totaling 250km, five runs totaling 55km, and two strength/core sessions that are about 30 minutes each. This is probably about 18 hours of training in all. I’ll usually have about two hard sessions of each sport in a week, but the rest is all easy mileage.

MSC: What’s the one workout that fills your heart with dread when you see it on your schedule?

JL: The most dreadful workouts for me are sustained tempo efforts. Notably, last week I had a run workout that included 15km of tempo, and a bike workout that included 80km of tempo. I’d much rather train at a very high intensity for a shorter period of time, but that tempo training is also important so I have no choice but to get through it.

MSC: What goes through your mind when you’re preparing for these difficult workouts?

JL: For me, the best way to prepare for any hard workout is to not focus on it too much. I make sure I have the appropriate nutrition and hydration prepared ahead of time, but I generally try not to think about the actual workout until right before it starts. Once I’ve started I’ll always get through it, so there’s no point in stressing about it beforehand.

MSC: Outside of triathlon, what stokes your fires?

JL: Outside of tris I like to hangout with family and friends, doing anything social is my go to. I have a terrible sweet tooth, so you could probably catch me eating desserts or candy any day believe it or not! Coca Cola is my favourite drink, and you might even see me drinking coke the morning of a race. If it’s the off season or an easy training phase, I like to go hiking, play other sports, or just anything active really.

MSC: You’ve got two big races coming up with Rev3 Cedar Point then Barrelman on September 18. What’s a good day for you at both these races?

JL: It’s hard to quantify what makes a good race or a bad one, typically I just know after the race whether I performed well or not. At Rev3 Cedar Point I’d like to finish the 750 meter swim within 20 seconds of the leaders, average 325 Watts for the 20km bike, and run under 16 minutes for the 5km run. If I can do that I have a chance to win the race, but a top three would be pretty good.

MSC: Barrelman is going to be a very interesting race with many top triathletes from across Ontario and beyond toeing the line at Niagara. What are your expectations for the race?

JL: It’s great to have so many of Ontario’s best coming out for Barrelman! Having close competitors always helps keep motivation high for the whole race. My plan is to get through the swim with the leaders, then average 280 watts on the bike and run under 1:16 for the half marathon. This should get me under 3:55 for the race, which is a loose time goal, and I would be surprised if that performance wouldn’t be good enough to get the win. Since it is my first half, there is always a chance I could get my nutrition or hydration wrong, which is where I could run into problems, but I’m preparing for that in training so it shouldn’t be an issue.

MSC: Thanks for taking time to discuss your season in such detail. Final question: looking ahead to 2017, what’s on your radar and how can you build on 2016?

JL: My 2017 season is still very much up in the air. I haven’t yet decided whether I will focus on non-drafting exclusively, or if I will keep racing the ITU circuit. I may end up racing several 70.3 races, like Cody and Lionel, but sticking to short course is also a tempting option. I have some unfinished business with short-course so I will at least do a few of those. I would love to stay involved with local racing and the MultiSport series. I probably won’t be doing as many races with MultiSport as I did this season, but I would like to volunteer and help promote the series as much as possible.

Join Jackson and many others at the #BarrelmanTri (www.NiagaraFallsTriathlon.com) on September 18th!