Out of all of the races in the Skechers Performance MultiSport Canada series, the Toronto Island event attracts the greatest numbers of first-timers.  And that’s just one quality that makes it so special.

For Torontonians like me, it’s the one race in the series that we can reach by bike – no car required! – with the help of the Ongiara Ferry.  It takes places in “the city’s backyard” on roads that are essentially closed to traffic.  Oh, and it’s nice and flat.

Clearly, it’s one of my favourite races to do each year.

Last weekend, I got to experience Toronto Island through the eyes of a newbie, taking part in my first triathlon… relay, that is!  Okay, so perhaps the title is a click bait, but this blog will be worth it!

How did a solo duathlete like me end up in a relay triathlon?  Well, for much of the season, I’ve been off with an injury, which still prevents me from high impact activities like running.  On the bright side, cycling is low impact, and so as the race approached, I hatched a plan.  I just needed some help… 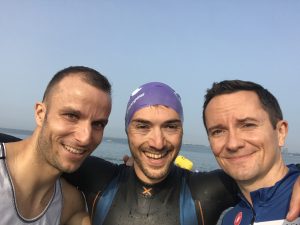 Pieter, Coach Michael and me, moments before the swim start.

Happily, my X3 Training family members jumped in: Coach Michael Liberzon as a swimmer and teammate Pieter Wijnhoven as a runner.  It was settled.

If you haven’t tried a relay, go for it.  It’s all the fun of a regular race, with 1/3 the stress and 1/3 the physical output.  (I suppose you could also look at it as 3 times the pressure, but I prefer to see the glass half full!)

It means you get to see more of the event as a spectator, including checking out my friends starting the first wave of the duathlon. 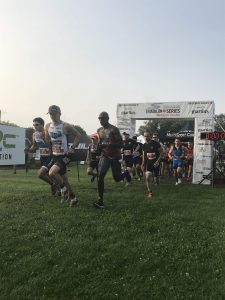 These guys were about to run 5 km.  I was about to wander over to the beach.

Our race started at 8:50 a.m., which gave us ample time to see what was happening around the site.  It struck me just how many staff and volunteers it takes to make this event a reality.  But before we knew it, our wave had arrived and it was time to get serious. 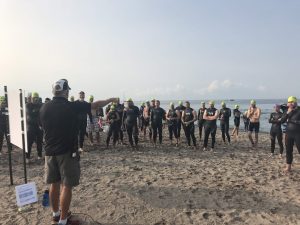 “Yes, you all have to swim out there!”  (*Quotation may reflect what was going on in my mind, not what was actually said by John Salt.)

Watching the triathlon start and seeing how far from shore that Coach Michael swam, my heart beat picked up a notch and I felt a ripple of anxiety.  Kudos to everyone that conquered the swim!

Michael got our team off to a great start and soon I was onto the bike and having an absolute blast.  It’s so much fun dashing out of the transition area to ride on fresh legs and knowing that I didn’t have to worry about a run after.  Out on the race course, I felt the effort pretty quickly, but I was able to sustain a decent pace that gives me hope about rebuilding my strength when my injury has healed.  I was also a kid in a candy store trying out my new 3SIXTY5 rear race wheel for the first time.  It rides like a dream! 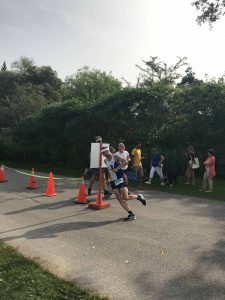 Arriving back into transition, I had lost nearly a minute on our main competition, and it was all up to Pieter to close the gap.  He took off like a shot while Michael and I made our way over to cheer him on.  We also nervously watched as world champion duathlete Matt Straatman – and triathlon relay competitor – hit the run course.  Pieter flew along the path and actually surprised us when he completed his final lap and headed for the finish line.  Coach Michael took off in pursuit, cheering the entire way. 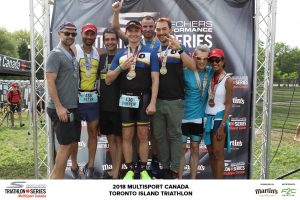 We were happily surprised to learn that we had won the race.  Winning aside, Pieter described it best, when he observed that in a relay you get all the best camaraderie of team sports, but in a sport that is usually solo.  We agreed that an allure of triathlon (or in my case, duathlon) is that it is up to you as an individual and your results, successes and failures are yours to own.   But in this case, it was a team effort, right down to finding the most efficient way to transfer the timing chip.  Huge thanks to Michael and Pieter for agreeing to race together!

Following all of the racing, watching other people race, and the awards, I opted for a little retail therapy.  Being a new triathlete and all, I thought it important to look the part, so I purchased a scrap of stretchy fabric, AKA a swim suit.  I hope that it will help me learn to swim 750 metres by next season…  I also meandered over to the Aquila booth because I’ve recently decided I need a new road bike.  Lots of thinking to do.

I’ve said it many times before that after several years of racing, MultiSport Canada events begin to feel like family reunions, because you see so many old friends.  The great thing is, you also meet new ones.  I’d like to send a shout out to the two new duathletes I met on the ferry back to shore — congrats on your first race!  I hope you’ll be back for more and join the province’s tight knit duathlon community. 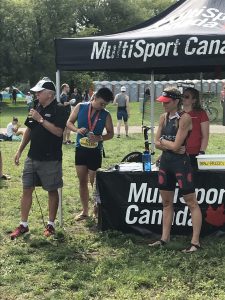 And finally, my thanks to John Salt and all of the staff and volunteers who made Sunday’s race possible.  You make it possible for so many people across the province to challenge themselves to achieve new heights and pursue their dreams.

Happy training and see you next time!