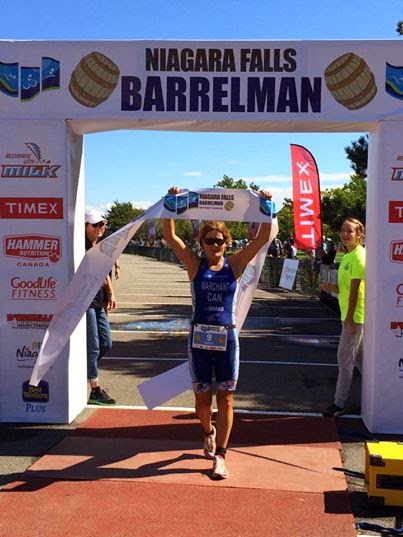 Wow… I still can’t believe that just happened, race of the season for sure and hopefully only a glimpse of my future potential in this sport. Too bad the season has to end now.

Although I’m sure most people are aware, I should start off on a note about the weather. A week before the race the forecast was 23 and sunny for race day. 2 days out it was forecast for humid and raining. Saturday morning it was a gloomy outlook of thunderstorms all day. But the weather gods came to our aid, and after some brief rain while in transition, it cleared up and turned out to be a beautiful day. Literally couldn’t have asked for better weather for the race.

Arriving at transition an hour and a half before race start meant lots of time to chill and chat with some of the other competitors. This turned out to be extremely beneficial because I was under the impression that I was still starting with my age group wave, and not with the pros. Turns out this was not the case and I got to start in the pro wave, which was a huge relief and could have saved me a lot of stress if I had known this earlier. So it was with excitement that I headed down to the swim start, knowing that I was not about to get pummeled to death by a bunch of other swimmers. Yay!

At 8:59 the pros set off (10 of us I think), which meant a nice clean start. I tried to draft off Angela but this lasted only about 50m or so and as soon as I lost the draft there was no catching up. After that it was a solo swim. The back stretch felt pretty brutal going against the current and waves- probably the longest 960m of my life, but swimming with the current in the opposite direction made up for it and I ended up less than a minute down from Angela (so better than Kingston where I was 90 seconds down).

Off onto the bike the roads were still pretty wet but it was no longer raining. The wind was pretty strong but I was feeling good and didn’t pay too much attention to it. About 2-3km in Lionel passed me and for a fleeting moment I literally had the impression that I wasn’t moving. I looked down at my legs just to make sure I was still pedalling, which I was, so smiled, shook my head in admiration, and kept going. Just after the 10km mark I caught up to Angela and could see she was struggling with the wind. Fortunately for me (at least in this instance), I am a little more compact in stature, so could stay down in aero and keep a relatively straight line- a few times the wind gusts caught me and I had to stop pedalling briefly to make sure that I didn’t end up off the road, but all in all it wasn’t all that bad- I actually enjoyed the extra challenge. I was expecting Paolina to catch me at some point during the ride, but 60km, then 80km, then 85km came and went without her passing me, which was extremely motivating as I knew I had to be riding well to keep ahead of her. I think in the end she was about 45 seconds to a minute back from me in T2 (she rode 2 minutes faster over the 92km).

Off onto the run next- the first couple of kilometers I was feeling a little tired, mostly because of the headwind, but I knew that if it was in my face at the beginning it would be at my back for the finish, so no worries. The run course was beautiful and fairly challenging with some nice hills in there. Kudos to the volunteers as they were all totally on top of having nutrition/water ready for the athletes as they came by. I was intent on laying down the fastest run split I could, mostly just to prove to myself that I could run, so there was no letting up (I think I ran a pretty even pace too).

I could feel blisters forming on the bottom of my feet during the second lap, but it was a small price to pay for victory. In to the last couple of kilometers I picked up the pace, glanced at my watch as it read 1hr18min and pushed to the finish, intent on not letting it get to 1hr21min. I was successful (9 seconds to spare), and although the run course was a tad short, it still would have been a PB for an open half marathon distance. Clearly I should always swim and bike before I run.

Post-race I was educated by Paolina on how to open champagne bottles – I still failed.

My result far exceeded any expectation I had and I’m still pinching myself and wondering if this is real. It’s hard to believe that 2 and a half years ago I didn’t really know what triathlons were and didn’t own a road bike. Hard work and many hours of training evidently pays off.

I was asked for honest criticisms and compliments of the race so here it is: I can honestly say I have no criticisms of the race. Everything went off without a hitch (in my eyes)- clean clothes and wetsuits were brought to T2 for us to pick up at the end of the race, my run gear was waiting for me at the right spot when I arrived, the bike course was well marked, police officers were alert and controlling traffic well, volunteers were at their stations and making sure we knew where to go, and the roads were well paved. Same goes for the scenic run course- volunteers and police did a great job, and running past the Falls was amazing. I would highly recommend this race to anyone. Hats off to John Salt and the Multisport Canada Team for organizing a world-class event.

Huge thanks as always to those who have helped me through this season. C3 for providing continuing support, guidance, and training partners, Multisport Canada for having the elite/pro division that attracts the best athletes in Ontario and for supporting their Ambassador Team, I had an awesome boss over the summer, Ron McCarville, who allowed me to have flexible hours some days to train, Jeff Slater, Waterloo Varsity Swim coach, who continues to help me improve in the water, and of course to everyone who actually reads this blog and cheers me on at races- I really appreciate it!!