I was very excited to be an event ambassador for the Kingston Triathlon, which sold out all its races for yet another year. I’ve visited Kingston for a kayak race several times and as a drive stopover on the way further eastward, but it would be my first time doing their triathlon. The historic City of Kingston offers a delightful array of small shops and waterfront parkettes, and brought a warm welcome to the athletes participating that day. 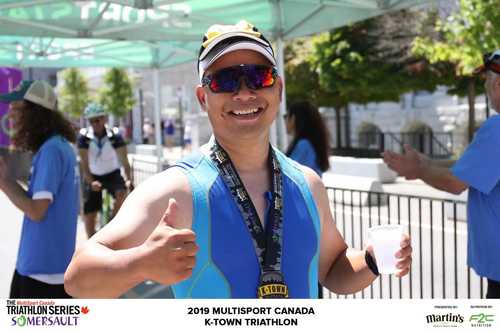 After spending a delightful night camped at Kingston Mills lock, I picked up a breakfast at Tim Hortons, drove downtown and parked three minutes away from Confederation Park. The beauty of smaller cities is the ample free street parking – try doing that in Toronto! I brought a volunteer who needed to hand out timing chips, so I had to drop by two hours before race start. Arriving early, while a good practice, also has the inadvertent effect of making me nervous. I spent a bit more time getting things prepared in the car before bringing everything over. The racks weren’t numbered so I picked a spot that was easy to mark from the swim exit and laid out my gear. Time inexplicably sped up, and before I knew it the pre-race announcements were on while I was trying to get my wetsuit on. Not much time for a warm-up swim!

I waded out into the warm waters for the in-water start, and then my wave was off! After 250m we made a sharp right turn and out for 750m. That buoy seemed so far away! I was having some difficulty with my wetsuit as it was uncomfortably tight around my neck. I had to undo the zipper a bit to breathe a bit better. After rounding the buoy, there were headwinds on the return portion. The chop of the water forced me to turn my head more skyward which wasn’t as hydrodynamic and certainly more awkward. Stripping out of the wetsuit to reveal my trisuit, the bike portion was next.

This is the first time I’ve been in a race where there was an untimed neutral zone. This was because of construction and traffic on the roads leading to the Causeway Bridge. This allowed everyone a precious opportunity to relax, take in hydration and food, and mentally prep for the course ahead. The route had a few rolling hills and traffic was never an issue with key intersections protected by police officers. After the turnaround, it was the same route back, save for a short jog portion. That road led up quite a steep hill, though I was glad that we turned left just before that climb and joined back to the main road instead! Once again we went through the neutral zone, racked the bike and changed over to the run portion.

The run westward was lined with cheering spectators and athletes on the return back to the finish. The view along the Waterfront Pathway was quite scenic, and the weather was quite hot. I was secretly hoping that the route would detour into the lake for a refreshing dunk. Along the route the aid stations were manned by enthusiastic volunteers who handed out hydration and wet towels to cool off with. We continued past the infamous Kingston Penitentiary, marina, and around the hospital. The route went into Lake Ontario Park, where there was a dog obstacle course set up with dogs running everywhere. On the return portion, I saw an Ornge helicopter parked on the helipad. I’ve never seen one up so close before. At the finish I was greeted with more cheering spectators. A volunteer put a medal around my neck and handed me a snazzy black and yellow cap. Time for pizza!! I have to say that this race had a lot of crowd energy and I would definitely recommend it to new and seasoned triathletes alike.